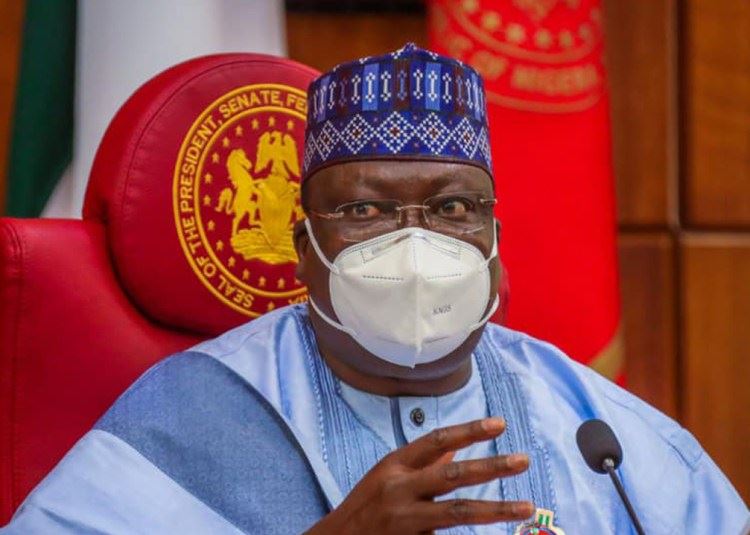 Senate President of Nigeria Ahmed Lawan says that President Muhammadu Buhari has not directed anyone to enact the removal of fuel subsidy.

Ahmed Lawan Nigeria’s Senate President disclosed that  President Muhammadu Buhari has not directed anyone in his government to undertake the withdrawal of fuel subsidies.

Ahmed Lawan told reporters following a closed-door meeting with Buhari at the State House in Abuja that he was in the villa to express the sentiments of his people on the proposed elimination of gasoline subsidies and other problems.

The Trade Union Congress (TUC) expressed support for the federal government’s intention to phase out fuel subsidies throughout the country on Tuesday.

Mrs Zainab Ahmed, Minister of Finance, Budget, and National Planning, announced in October that the federal government had set aside funds for a petrol subsidy only for the first six months of 2022, as the government moved toward complete deregulation of the sector.

“We only factored in subsidies for the first half of the year in our 2022 budget; for the second half of the year, we’re looking at complete deregulation of the sector, saving foreign cash and maybe earning more from the oil and gas industry,” Ahmed Lawan added.

However, Ahmed Lawan commented on the matter, saying that federal legislators were concerned about various agitation and planned rallies across the country, prompting the meeting with the president.

He claims that the subsidy cannot be passed on to citizens, despite uncertainties about the country’s claimed daily consumption of 100 million gallons of Premium Motor Spirit (PMS).

The Senate President Ahmed Lawan expressed his delight at the fact that Buhari has not instructed anyone to eliminate the petroleum subsidy.

“Well, Nigerians would be interested to hear what I’ve come to talk with Mr President, among other things,” he remarked. Many of us are concerned about recent agitations and protests, and many citizens are concerned that the federal government will eliminate the petroleum subsidy. Our constituents across the country are concerned.

“And for us, as parliamentarians, as legislators representing the people of Nigeria, this must be of interest to us. And we’ve just finished our recess, we had gone home to our constituencies and senatorial districts.

“And will felt the pulse of our people. And I found it necessary to visit Mr President, as the leader of our government and our leader in the country, to discuss this particular issue of concern to Nigerians, and I’m happy to inform Nigerians that Mr President never told anyone that the petroleum subsidy should be removed.

“I know and I agree that the subsidy is very heavy. But I think we must never transfer the burden to the citizens.

“We need to look at this critically and see how we can find the truth. Because I am not convinced that within the boundaries of Nigeria we are consuming 100 million litres. Probably neighbouring countries may be benefiting from this. Can’t we do something about it?

“It is a failure on us if we are not able to control it, this particular aspect of smuggling of the petrol and then in return, push the burden to the ordinary citizen.”

He responded to the question of what will happen now that the budget for 2022 does not include a subsidy: “No, I’m not going to speculate on that. But I’m telling you, what I know, from my discussions with Mr President, and I don’t want to go beyond that kind of understanding.

“He didn’t tell anybody that we should remove petroleum subsidy. And those of us who represent the people know how people are already stressed over and again, this is going to kill everyone if people don’t say we know is going to be too much for them.

“So, I just want to commend Mr President, that he didn’t order anybody, to say that petroleum subsidy will be removed, even though we know it’s a burden. So it’s now our task, as an administration, we must find a solution. Let’s go and lock ourselves somewhere”.

He praised the President for adhering to his philosophy of not overburdening ordinary citizens, noting that government law is supposed to serve the people.

“Government is meant to serve people. And the essence of government law we all know is to protect the lives, property and welfare of the people. And that the federal aspect is part of the welfare.

“It may not be exactly the way we want it in the implementation of subsidy. But that is our challenge as an administration as a government.

“So, we need to come together, both the legislature, the National Assembly, and those people and institutions and organizations that are responsible in dealing with this matter. To find a solution to this.”

Ahmed Lawan, on the other hand, emphasized the importance of stakeholders working together to find a solution to the subsidy issue.

While dismissing the Peoples Democratic Party (PDP) governors’ position on subsidy removal, Ahmed Lawan emphasized that the main opposition party had its chance and should have taken action.

Speaking earlier during the plenary on the 2022 budget, Senate President Ahmed Lawan noted with regret that borrowings remained the only option left for the country to fund the spending plan due to poor revenue being generated by the nation, at the moment.

He, however, said efforts would be intensified by the Senate to carry out aggressive oversight activities that would make the revenue-generating agencies to be more alive to their responsibilities.

Ahmed Lawan said, “Funding of the 2022 budget is predicated on significant borrowing. Our country is caught between the devil and the deep blue sea.”

OTHER NEWS FROM NIGERIA