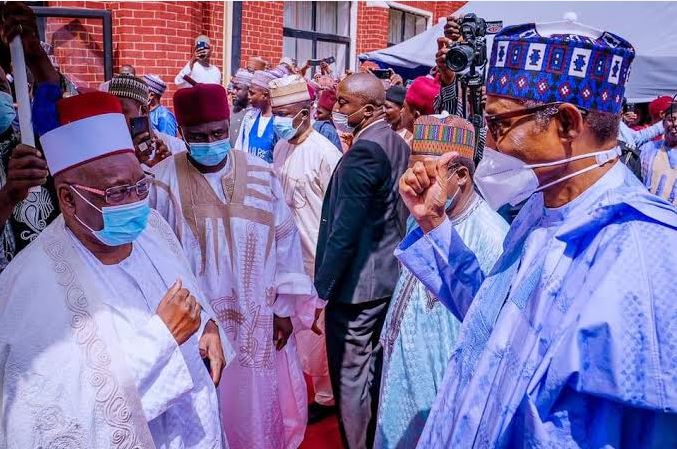 It gives us great pleasure to inform you, Your Excellency, that peace has gradually returned to Borno, and we must express our gratitude and admiration for your administration’s efforts to bring sustainable peace to Borno and the Northeast.

Alhaji Abubakar Ibn-Umar Elkanemi, the Shehu of Borno, has stated that the security situation in the state has much improved since President Muhammadu Buhari took office.

Alhaji Abubakar Ibn-Umar Elkanemi made the announcement on Thursday when the President paid a visit to Borno to inaugurate some of the state’s initiatives.

“It gives me great pleasure to inform your Excellency that peace has gradually returned to Borno, and we must truly appreciate and congratulate your administration’s efforts to bring sustainable peace to Borno and the entire North East Sub-Region.”

“I am pleased to inform the President that farming activities have resumed in the majority of the state, and many displaced persons have begun to return to their communities,” Shehu of Borno said.

MUST READ:  Protesters in Sudan blocked road leading to Egypt for 9th day

The royal father Shehu of Borno expressed hope that, with the recent mass surrender of Boko Haram members, normalcy would return to the region, as well as the country as a whole.

Shehu of Borno also praised the troops and officers of the Nigerian armed forces for their devotion and dedication in bringing reasonable peace to the country and expressed condolences to the families of those who paid the ultimate price in the line of duty.

“On our part, we will continue to pray for their success and for peace to reign in all parts of the country, as well as for Mr President, who has achieved amazing success in the rapid expansion of the Nigerian economy despite all difficulties.”

“To Gov. Babagana Zulum, who, despite the state’s security concerns, has spared no effort in restoring peace and embarking on initiatives that will have a good influence on the lives of our people.” “May Allah gives him even more strength,” Shehu of Borno prayed.

Shehu of Borno Alhaji Abubakar Ibn-Umar Elkanemi stated that road renovation will not only improve security but also speed up the rehabilitation of degraded neighbourhoods, allowing displaced people to reclaim their economic well-being.

Governor Zulum spoke and shared similar sentiments, saying that the counter-insurgency campaign’s victories would not have been feasible without the Nigerian Military, Civilian Joint Task Force (CJTF), and other paramilitary officers’ devotion.

Despite the hurdles, the governor stated that peace was gradually returning to the state.

He mentioned several problem spots in Akira Uba and along the Lake Chad coasts in northern Borno, but guaranteed that he would work with the military chiefs to address the issues.

“Nigerians should be fair to the administration in terms of reflecting on where we were before we came in 2015 and how far we have achieved today,” Buhari stated in response.

“I challenged everyone to go check it out.” Unfortunately, when we arrived, insurgents from the South-South were attacking pipelines, and production had dropped to half a million barrels per day.

“The price of a barrel of oil has dropped to 36 dollars.” So, in terms of relative time and resources, you can tell that this administration has paid attention,” President Buhari remarked.

The president asked for the elites’ ongoing support in educating the less knowledgeable Nigerians about the efforts his administration is doing despite limited resources.