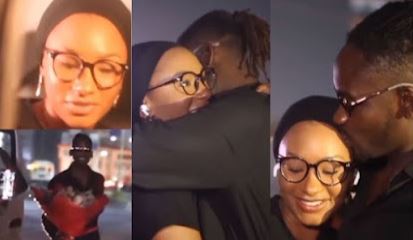 Mr Eazi surprises his girlfriend Temi Otedola with rose flowers, while she was on a movie set, video footage sees the singer taking the flowers to Temi.

Temi Otedola the daughter of business mogul Femi Otedola got a surprise rose flower from his boyfriend Mr Eazi, while she was on a movie set. Indeed it was so romantic and Temi appreciated it giving a close hug to Mr Eazi.

The video shared on Instagram reels has been attracting so much attention, as the two lovebirds look so good together.

Temiloluwa Elizabeth Otedola (born 20 March 1996) is a Nigerian actress and also a blogger. She is known for playing the role of Moremi Oluwa in the 2020 film Citation.

In December 2014, Otedola launched JTO Fashion, a fashion blog. She takes photographs of fashion, beauty, art, and travel adventures. In 2020, she made her Nollywood debut in Kunle Afolayan’s Citation. Her leading part in Citation won her a Best Actress nomination at the Ghana Movie Awards and a nomination for Revelation of the Year at the Best of Nollywood Awards 2020.

She is the youngest sister of DJ Cuppy and Tolani, and the last daughter of Nigerian billionaire and business mogul Femi Otedola. She hosts a podcast called How Far with Mr Eazi and Temi with Nigerian singer Mr Eazi, with whom she is in a relationship.

Temi Otedola has over a million followers on Instagram.