Singer,TEMS Postponed Shows In Birmingham After Being Diagnosed With Reflux Laryngitis

Singer, TEMS Postponed Shows In Birmingham After Being Diagnosed With Reflux Laryngitis

Music star, Temilade Openiyi popularly known by her stage name TEMS announced on her verified Instagram account that the shows coming up this week in Birmingham have been postponed after Doctor’s diagnosis reveal she has Reflux Laryngitis.

Reflux Laryngitis is an inflammation of the larynx (voice box). Symptoms often include a hoarse voice and may include fever, cough, pain in the front of the neck, and difficulty swallowing.source Wikipedia

The singer apologised to all her fans who have bought tickets for the show and noted that all tickets are still valid.

TEMS added, saying that a new date will be announced tomorrow and promised to return back on stage better by the Grace of Almighty God.

Here’s a screenshot of TEMS statement… 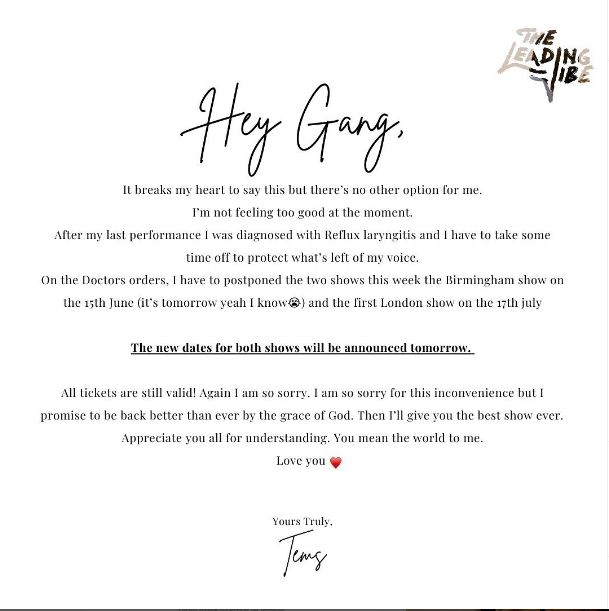 MUST READ:  Regina Daniels leaves fans in awe rocked in her fashion brand made outfit(photos)
Related Topics:featurednaija celebrity news
Up Next

Video:Yul Edochie 2nd Wife,Judy Showers Praise On Him After Extending His Contract With Life Beer