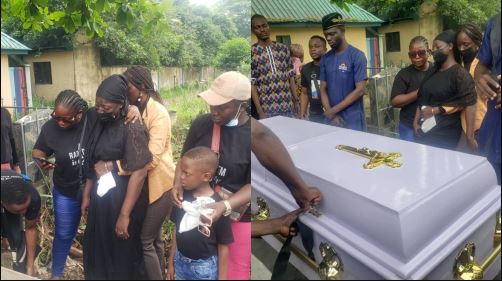 On May the 12th 2022, Imoh was beaten and set ablaze by a mob suspected to be commercial motorcyclists famously known as Okada Riders near Beer Barn, a leisure facility in the Lekki axis of Lagos.

David Imoh, a sound engineer who was burned to death by a mob, was buried in Lagos.

This was after a disagreement with a commercial motorcyclist known as Okada rider over N100.

His death sparked public outrage in the state and across the country, with Nigerians demanding that his killers be apprehended and prosecuted immediately.

Five people were later arrested in connection with the lynching of the sound engineer.

The Lagos state government banned motorcycle operations in six local government areas days after the incident. However, tears flowed freely as his remains were interred at Atan Cemetery in Yaba on Friday.

A song ceremony was held for the deceased on Thursday, June 2 at the Church of God Mission International, Victoria Island Zonal Headquarters, Garden City of God, T. F. Kuboye Street, Oniru, Lagos, according to a family member.

MUST READ:  Leciester City Ndidi to miss rest of the season
Related Topics:crimefeaturedNaija News
Up Next