Southampton 1-1 Man City: Saints and City shared the spoils at St Mary,s.Unusual goalscorer Kyle Walker Peter’s scored for Saints while Laporte got the equaliser for the Cityzen’s via a set-piece.

In-depth match report as Kyle walker Peter’s scored in the seventh minute to get his first-ever Premier League goal that stunned title chaser Man City who equalised in the 65th minute. 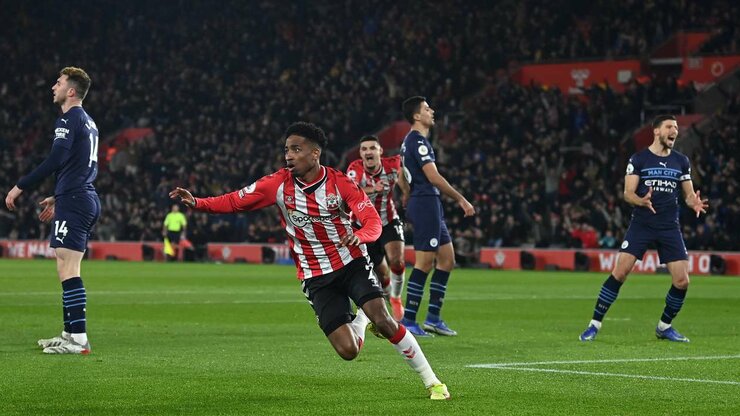 Manchester City’s title hopes suffer a setback after a 1-1 draw with Southampton at St Mary’s Stadium, which ended a record of 12 straight Premier League victories.

Southampton 1-1 Man City: Southampton came into this game knowing full well of the daunting challenge of facing Man City that sits at the top of the Premier League table, but Pep Guardiola’s side got off to a poor start on the south coast.

Kyle Walker-Peters’ first Premier League goal startled them in the seventh minute, as he connected up beautifully with Nathan Redmond, took a touch, and fired a perfect strike past Ederson. Armando Broja thought he had increased the hosts’ lead thanks to Oriel Romeu’s through ball, but the assistant’s flag saved Guardiola’s men’s blushes.

Man City had yet to cause too many difficulties for the Saints defence, but Raheem Sterling came within inches of levelling the score when he latched onto Kevin De Bruyne’s pass, cut inside the box, and fired a shot barely over the bar. Moments later, he had an even better chance but instead sent a shot straight at Fraser Forster from point-blank range.

After the break, Ralph Hasenhüttl’s team continued to cause difficulties for their illustrious opponents, with Broja coming close on two occasions – the Albanian’s header hit the post, and he was wonderfully foiled by Aymeric Laporte’s challenge to keep out his close-range shot.

But, for all of City’s brilliance this season, it was a set-piece, courtesy of Laporte, that finally shattered Southampton’s resistance. In the 65th minute, the Spaniard made a late run into the box to meet De Bruyne’s free-kick with a straightforward header that flew past Forster.

With an exquisite strike that grazed the outside of the post, the Belgian almost completed the rescue act, but Saints hung on with their defence marshalled by the superb Mohammed Salisu to earn a well-deserved point.

The implication of this result is that Man City now has 12 points lead on top of the Premier League table, but this draw leaves the door ajar for Liverpool, who can close the gap to six points with their two games in hand.

Man City Laporte: We are not happy to drop points

We want to win every single game, so we are never happy to drop points, but we will fight until the end. This is what we have to do.

“Now we will focus on the next one and this is important to do this for the rest of the season.”

“We had to dig deep. I thought Man City were good but we held our own we had to defend quite deep but we did plan for it, we were prepared and we were ready and we stuck to the plan and we came away with a point so we are really happy.”

ENOMAOMORUYI Man of the Match: