Stalemate in Ghana vs Nigeria mouthwatering clash at the Baba Yara Stadium (Kumasi), the game was tense as both teams played with a hand brake which impeded the attacking prowess of both sides. 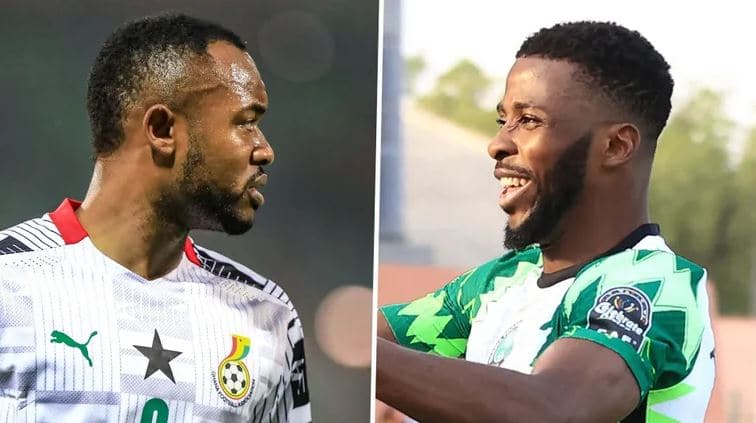 Ayew of Black Stars and Ihenancho of Super Eagles

On Friday night, West African rivals Ghana and Nigeria played out a stalemate in their CAF Third Round, first-leg 2022 World Cup qualifier at the Baba Yara Sports Stadium.

The Black Stars and Super Eagles cancelled each other out in a fiercely contested match on a steamy night in Kumasi, leaving their playoff tie – and the fate of one of five African berths at Qatar 2022 – delicately poised ahead of the return game in Nigeria next midweek.

Ghana capitalized on the ferocious atmosphere at the packed venue, launching early attacks in which they attempted to get in behind Nigeria’s defence by using the pace of Abdul Fatawu Issahaku, Felix Afena-Gyan, and Mohammed Kudus.

In the first quarter, Nigerian forwards Kelechi Iheanacho and Victor Osimhen fed off scraps, with the latter having only one real chance when left-back Sanusi Zaidu whipped in a great cross that was just beyond the No 9’s reach.

The first notable save from either goalkeeper came in the 33rd minute when Nigeria’s Francis Uzoho palmed away a thunderous shot from just outside the penalty area by Issahaku.

In the final minutes of the first half, the Super Eagles began to find some attacking rhythm, with their best chance falling to Joe Aribo as he ran onto a ball directed to the right of the penalty area, but the Rangers midfielder blazed a shot high and wide.

The first half ended with the teams still tied at 0-0, while Ghana took control of the second half, putting the visitors on the back foot with attacking pressure – though they did not put Uzoho under pressure.

On 55 minutes, Black Stars goalkeeper Joe Wollacat made his first notable save, saving a shot from Moses Simon after the winger cut inside from the left and let fly.

On the hour mark, Ghana’s Thomas Partey saw a long-range strike deflected just over the target, prompting the Super Eagles to make a double change, with Emmanuel Dennis and Frank Onyeka replacing Samuel Chukwueze and Aribo.

Ten minutes later, Kudus cut inside from the right and saw his low shot saved by Uzoho, with Afena-Gyan missing a chance at the far post from the resulting corner as the hosts continued to search for a breakthrough.

MUST READ:  Norwich Relegated From PL After 2-0 Loss To Villa

The Super Eagles were awarded a penalty with 15 minutes remaining in regulation time after Iheanacho and Oghenekaro Etebo’s high press forced a handball on the ground from Baba Iddrisu, but a VAR review convinced referee Redouane Jiyed that he was first tripped, prompting him to overturn the spot-kick decision.

In the remaining minutes of the game, Ghana provided the more attacking impetus, but they were unable to pose a credible threat to Uzoho’s goal, and the teams settled for an uneasy stalemate.

The two West African giants will meet in Abuja, Nigeria on Tuesday for the second leg that will decide who goes to the World Cup in Qatar.