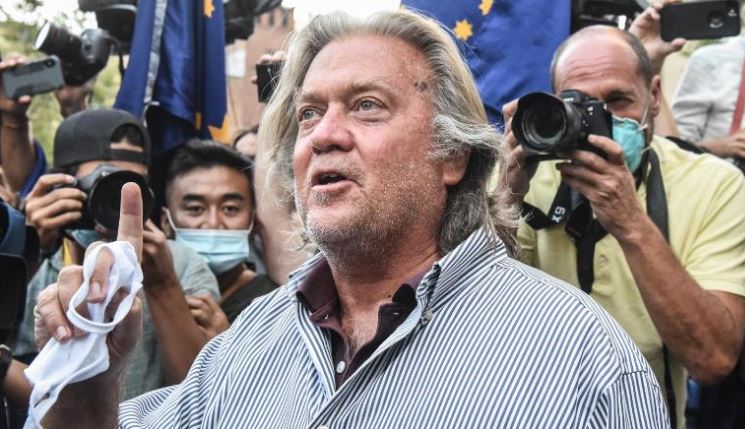 Former Trump strategist Steve Bannon has been charged with contempt of Congress by a federal grand jury.

Steve Bannon charge with contempt of congress, this is related to the raiding of the US Congress building on January 6 by Former President Donald Trump supporters.

Since the House sent Trump associate Steve Bannon to the Justice Department for contempt on October 21, Attorney General Merrick Garland has been under intense political pressure to indict him.

“Since my first day in office, I have pledged Justice Department personnel that by word and deed, we will demonstrate to the American people that the Department upholds the rule of law, follows the facts and the law, and pursues equal justice under the law,” Garland said in a statement Friday.

“Today’s charges demonstrate the Department’s unwavering dedication to these values.”

Bannon, who is 67 years old, was charged with one count of refusing to attend for a deposition and another of refusing to produce documents. According to the Justice Department, each offence carries a minimum of 30 days and a maximum of one year in prison.

Critics have questioned how much power the House select committee on January 6 has to force cooperation from former White House and Trump administration officials without an indictment. Mark Meadows, the former White House chief of staff, failed to appear for a deposition on Friday, according to sources familiar with the inquiry, setting up a potential showdown that may lead to the panel launching a criminal referral process against him as well.

MUST READ:  Anger As Lady Dies After Plastic Surgery;Police Investigate

Jeffrey Clark, a former Trump Justice Department official who had been subpoenaed, came before the committee last week for more than an hour but refused to answer any questions.

“The grand jury was provided with overwhelming and indisputable evidence of Steve Bannon’s breach of a congressional subpoena,” said Rep. Jamie Raskin of Maryland, a member of the select committee.
“These despicable abuses of the rule of law will not be tolerated by the American legal system,” he added.

A request for comment from Bannon was not immediately returned. According to a person acquainted with the situation, he is anticipated to self-surrender on Monday and appear in court on Monday afternoon. District Judge Carl Nichols, who was selected by Trump, has been assigned to the case.

In early October, a House committee subpoenaed records and testimony from Bannon.

The White House, President Joe Biden has rejected to invoke executive privilege in the case of witnesses and materials pertaining to the Capitol attack on January 6, citing the unprecedented nature of the attack.

The White House has declined to comment on the indictment announced on Friday.

WHAT ROLE DID STEVE BANNON PLAY IN JAN 6 CONGRESS ATTACK?

The committee has cited reports that Bannon spoke with Trump in the days leading up to the Capitol riot, that he was present in the so-called “war room” of Trump allies at the Willard Hotel in Washington as the attack unfolded, and that he predicted, “all hell” was “going to break loose” the next day on his podcast the day before.

“In short, Mr Bannon appears to have had a multi-faceted role in the events of January 6th, and the American people are entitled to hear his first-hand testimony regarding his actions,” the House committee said in its report.

Legal experts have also expressed doubt over Bannon’s refusal to cooperate with the subpoena, citing the fact that the question of whether Trump as a former President can claim the privilege is still unresolved, and that Bannon was not working for the government during the period under investigation.

The criminal case against Bannon might go on for years in court, and a successful prosecution is far from guaranteed.

The case of Steve Bannon is expected to raise new legal problems concerning executive privilege and the House’s authority to enforce investigative subpoenas when seeking information about the executive branch.

The House has also placed its hopes on the prosecution of Bannon, with the committee attempting to use him as an example of what may happen if witnesses refuse to cooperate.

Meadows should be on the lookout after skipping Friday’s deposition, according to Democratic Rep. Pete Aguilar of California.

“If his disobedience continues, the record will disclose the wide variety of issues the Select Committee sought to explore with Mr Meadows until his decision to hide behind the former President’s bogus claims of privilege,” the congressmen wrote.