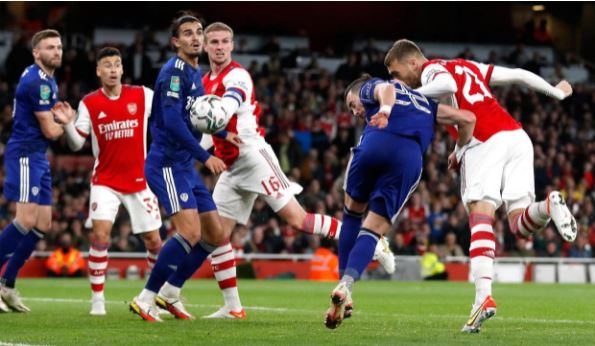 It was a delight to see Chambers get game time and a plus to score a goal with just his first touch coming in as a substitute for injured Ben White.

Arsenal qualified for the Carabao Cup quarter-finals after goals from Calum Chambers and Eddie Nketiah in the second half saw off Leeds’ charge.

It was no surprise to see Mikel Arteta made changes to his team after a tremendously positive win against Aston Villa and ahead of a tough match against Leicester this weekend.

There were nine changes to the starting lineup for Arsenal with only Ben White and Emile Smith Rowe keeping their spots – but the spotlight was on the bench, where Salah Oulad M’Hand made his debut.

While for Leeds United Kalvin Phillips returned to the Leeds side as one of four changes for their fourth-round clash at Arsenal.

The England midfielder has been sidelined with a calf problem but came into the team at the Emirates Stadium, with Adam Forshaw, Tyler Roberts and debutant Cody Dramah also starting.

In a tightly contested first half, Arsenal made much of the early running, with Eddie Nketiah pulling a shot wide and Sead Kolasinac’s effort from a tight angle saved.

Leeds, on the other hand, posed a real threat on the break and had a clear sight of goal when Diego Llorente played a precise ball over Arsenal defence for Dan James to rush into, but Bernd Leno saved his shot.

After Jack Harrison took aim with a ferocious shot at the back post, our German goalkeeper produced an outstanding save to deny him, then Smith Rowe flashed one over at the other end.

That was the end of the first half but Arsenal seized the lead after the break when Chambers – who had come on for the injured Ben White seconds before – headed the ball over the line, that was his first touch of the ball and the goalline technology granted it after a long wait.

Arsenal increased their lead when Nketiah, who was playing against his former loan club, raced on to an under-hit headed backpass, lifted the ball beyond Illan Meslier, and rolled it in for Arenal second goal of the night.

Eddie Nketiah now has eight goals in Carabao Cup playing for both Arenal and Leeds Utd.

There was still time for Alex Lacazette to rob Kalvin Phillips and gallop through, but he blasted his shot past the net – but it didn’t matter since Arsenal spot in the quarter-finals was already secured.

READ WHAT BOTH MANAGERS SAID AFTER THE GAME

“I think a really good performance overall against a team whose manager demands them to be so committed in every single action.

We played well and understood the game and executed it in the right way.

“They gave us some issues, they always do, because every time you lose a duel you can be one vs one, the way they play! We adjusted a few things at half-time and we got better and stronger.”

“The first half we had an intensity that we couldn’t continue in the second half.

“When you miss chances, it always gives the feeling to the opponent that they can alter the result themselves.”

RESULTS FROM OTHER CARABAO CUP TIES

NEXT UP FOR BOTH TEAMS

Arsenal returns to Premier League action on Saturday when they travel to Leicester City for a 12.30 pm kick-off.

WHEN WILL THE DRAW FOR THE CARABAO CUP QUARTERFINALS HAPPEN?

The Carabao Cup quarter-finals will be held on Saturday from  10:30 am.

It will be conducted by Fenners and Jimmy Bullard.