Terrorists grooming their own children to be insurgents - Army General 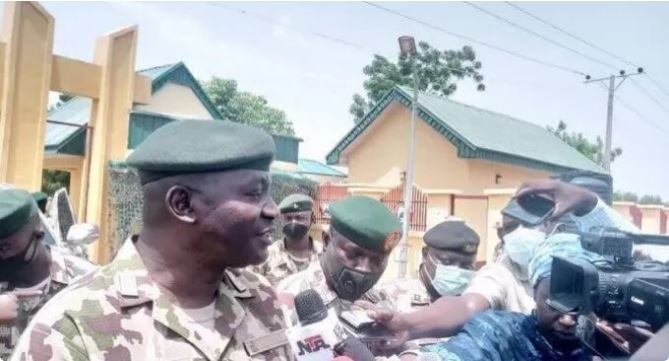 41,000 of the terrorists who have surrendered, according to the theatre commander, are youngsters who were being prepared for combat.

“God has been very magnanimous for us, we have received a lot of surrendered individuals. We are moving almost 83, 000 now, out of that number, over 41, 000 are children,” Musa said.

“The terrorists are trying to develop a new set of terrorists, their own children and that would have been very dangerous because you know normally for children when they grow up and whatever they see is what they copy.

MUST READ:  Banky and I did a 'collabo',he's perfect-Adesua Etomi gushes over result from 'collabo'(photos)

“So, if they grow and think killing is natural, they become very dangerous.”

The theatre commander declared that the military and other security organizations would keep using potent tactics to end terrorism in the area.

“Whatever it takes, whatever it needs for us to have peace, we are determined to achieve that. The chief of army staff has been very, very supportive in all we are doing and that has made our work much, much easier,” he said.

MUST READ:  Oil soar above 100dollars and stock prices plummet as Russia attack Ukraine
Related Topics:featuredterrorism
Up Next

Persistent Attacks on our offices may jeopardize 2023 elections – INEC Chairman