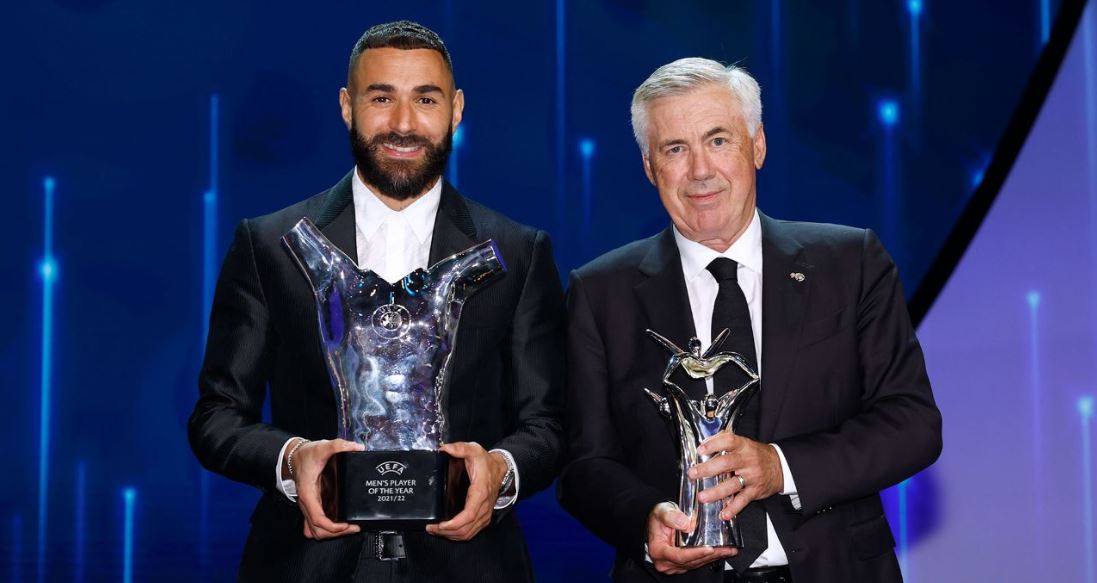 The French striker was named Men’s Player of the Year, and the Italian was named Best Coach for the 2021/22 season.

The UEFA 2021/22 awards were presented in Istanbul, and the big winners were Karim Benzema and Carlo Ancelotti. The French international was named Men’s Player of the Year, and the Italian was named Coach of the Year.

The Real Madrid captain received more votes than his teammate Courtois, who finished second, ahead of Kevin de Bruyne, who finished third.

He had an incredible year, helping the team win the Decimocuarta, LaLiga, and the Spanish Super Cup while scoring 44 goals. He also finished as the top scorer in the Uefa Champions League, with 15 goals, which helped him win the competition’s Player of the Year award.

Benzema’s reaction: “The amazing support from our fans helped us to come back in the games”

“I’d like to thank my teammates, my coach and the club president. The amazing support from our fans helped us to come back in the games. For me, the best day in the Champions League was the return leg against PSG, the fans really lifted us to help us fight back. Ancelotti is the best coach in the world, he gives me a lot of confidence and he’s a top professional. I’m delighted that he’s my coach”.

“I’m really happy. It’s the first time I’ve won this award, but what’s most important for me is winning trophies with my team”.

Carlo Ancelotti was named 2021-22 UEFA Men’s Coach of the Year after leading our club to Decimocuarta, LaLiga, and the Spanish Super Cup, and was chosen ahead of Klopp and Guardiola. The Italian, who received more votes than Klopp and Guardiola, became the first coach in history to win the European Cup four times, as well as the only coach to win the league title in all five of Europe’s top leagues: Spain, Germany, France, England, and Italy.

MUST READ:  Actor Jim Iyke Address Rumours Of His Conversion To Islamic Faith

The Italian’s reaction: “There was good chemistry in the team and with the fans”

The Real Madrid coach had the following to say: “Thank you for this award. Thanks to Arrigo Sacchi, who was a great teacher for me. I’d like to thank my players, my club and my coaching staff. I’d also like to thank the fans for those amazing and magical nights at the Santiago Bernabéu. And the club president for giving me the chance to return to Madrid. As well as my family, who have given me the space to do my job”.

MUST READ:  BBNaija Reunion:Liquorose Give Reason For Breaking Up With Emmanuel

“There is no magic formula to winning. But I’m very passionate about the game. It also comes down to the quality of the players you have to train. It was a really special season because we had a really good squad, a good mix of veterans and young players. There was a fantastic connection in the dressing room and good chemistry in the team, and with the fans”, added the Italian.

The award is decided by a jury comprised of clubs from the last Uefa  Champions League group stage, the 2021/22 UEFA Europa League, and the UEFA Europa Conference League, as well as a panel of journalists appointed by the European Sports Media Association (ESM).

Along with Benzema and Courtois, who finished third, another two Real Madrid players were chosen from a field of 15 players to receive votes for the award. Modric finished fifth, and Vinicius Jr. finished ninth.

Related Topics:featuredsportsuefa 2021/22 awards
Up Next

PL:I Could Have Acted Differently-Mike Dean Admit Making A Mistake In VAR Decision During Chelsea’s 2-2 Draw With Spurs