We can play better but I'm thrilled with the four goals:David Moyes 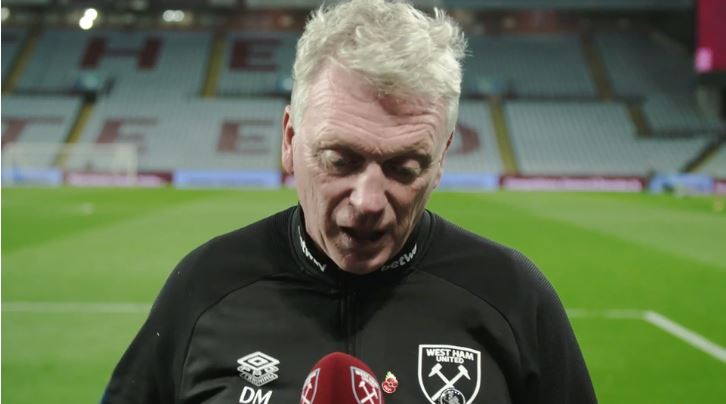 David Moyes said this on West Ham website: we can play better but I’m thrilled with the four goals scored against Aston Villa in the Premier League on Sunday.

David Moyes paid tribute to the backing of the Claret & Blue Army after the Hammers’ 3,000 travelling fans overcame significant travel disruption to roar their team onto a 4-1 victory at Aston Villa on Sunday.

With trains out of action throughout the morning and early afternoon due to inclement weather en route, the Hammers fans ensured they got to Villa Park by hook or by crook to witness another away day to remember.

Ben Johnson, Declan Rice, Pablo Fornals and Jarrod Bowen all hit the back of the net as their team made it a Club-record eight Premier League away games unbeaten and moved level on points with third-placed Manchester City.

And for David Moyes, the most encouraging thing is that he feels there is still more to come from his team.

The supporters were magnificent once again.

Great credit to the supporters because I know that the trains were difficult today – even my son was coming down to the game on the train and he had problems.

Thanks to all the supporters, they were great and hopefully they’ve enjoyed that as well. We’ve scored two goals down their end late on too, so I’m sure they did.

We had to fight hard to get that win, even though the scoreline is a comfortable one.

It was a really good result and I have to say a really hard-fought one.

Even when Aston Villa was down to ten men it was far from easy. The game probably changed a bit at that time and we can play better, but I’m thrilled that we got four goals.

There are ten or 12 teams, maybe more, who are really close [in standard] and any one of them can win on any week.

Just at the moment though we’ve got a really good group of players that I have to keep driving on. We’re not going to sit back and enjoy it too much, even though I’m smiling and loving the thought of the victory today. It’s a fabulous victory but I’m looking for even better performances, I have to say.

On been unbeaten away and not fazed by games on the road.

I think we’ve got to the stage where we’re really confident in a lot of the things we do. The players are understanding their roles and what’s expected of them.

We can’t let up, I’ve told them that if we think we’re doing great and it’s all easy it’ll fail, so we’ve got to keep at it.

On the two Academy graduates, Ben Johnson and Declan Rice

Johnno took his goal really well and then we let them back in the game. I thought we were really careless for about 15 or 20 minutes in the first half, but thankfully Declan came up with one in that period which we know he’s capable of.

Manu helped us settle down again when he came on in the second half. He gave us much more quality and made the final pass more often, like the one he slid through to Jarrod for the tap in, I thought we were missing that and I think we’ve been missing it in recent games where we’ve not quite picked people out.

We’ve been a little individual at times, but thankfully Manu got us that goal.