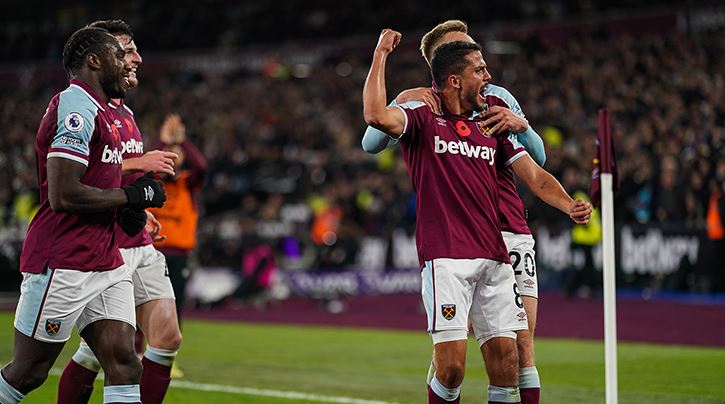 David Moyes team keeps proving doubters wrong with their impressive results in the Premier League. Liverpool is the latest casualty to suffer defeat from the hammers. With a 3-2 triumph at a noisy London Stadium, West Ham United has moved to third place in the Premier League table going above Liverpool.

West Ham overcame Liverpool in 5 goals thriller at the London Stadium bringing the ‘Reds’ 20-game unbeaten in the Premier League to an end.

Liverpool has been fast to score recently, scoring in the first ten minutes of their last three Premier League games.

Today in the London Stadium the roles were flipped this time, with West Ham taking the lead in the fourth minute. Pablo Fornals whipped in a dangerous corner that Alisson, who was under pressure from Angelo Ogbonna, diverted in.

The goal was upheld after VAR looked for a possible foul and a possible handball by the Italian, but both were determined to be inconclusive therefore the goal stood. 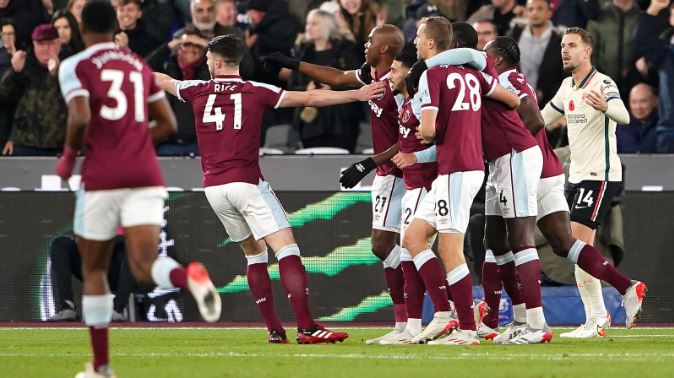 Liverpool boss Jurgen Klopp disagreed with both decisions, after the game saying it was a “clear foul” on Alisson for the goal, and a “reckless challenge” from Cresswell.

In quest of an equalizer, Liverpool dominated, having 69 per cent of possession before halftime, but were forced to fight hard to break down the ‘Hammers’ 11-man deep block.

They didn’t get a shot on goal until the 41st minute, but it was a tremendous free-kick from Trent Alexander-Arnold that brought them level. Declan Rice brought down Mohamed Salah on the edge of the box, and the England right-back gave Lukasz Fabianski no chance with his following attempt, which nestled in the top-right corner.

With everything on the line in the second half, Liverpool’s unbeaten record at the London Stadium was put to the test once more in the opening minutes.

The hosts’ comeback began here, unsettling Liverpool on the counter and retaking the lead in the 67th minute.

With Alisson failing to get enough on the ball to keep it from slipping in, Fornals broke through the lines and added a goal to his earlier assist.

With 16 minutes remaining, Liverpool buckled at the sight of another set-piece, this time Kurt Zouma heading in his first goal for the club, and the ‘Reds’ looked devastated, facing their first defeat of the season.

Substitute Divock Origi halved the deficit with a fine turn and finish from the edge of the box, just seven minutes after coming on for Diogo Jota, and Mane should have equalised in stoppage-time, heading wide Alexander-Arnold’s free-kick.

West Ham United had pulled off a spectacular triumph, forged in the crucible of east London by an indefatigable squad and management.

West Ham’s starting lineup was unchanged from the 4-1 victory over Aston Villa a week ago, with neither Vlasic nor Yarmolenko returning.

READ WHAT BOTH MANAGERS SAID AFTER THE GAME…

West Ham manager David Moyes: “It is a brilliant victory against a really good team. We played Thursday night too and to put in a performance with the energy to hang in at the end is great for the players.

“Liverpool has been so good with the ball, I think they have improved. We tried to shore up a bit, I didn’t like a bit how we played in the second half so we did a little change and it worked. We played so well in the second half. We got three goals and on another day maybe could have got more.

“Last year we tried to get at them and they picked us off sometimes so we had to be a bit patient.

“I remember when I came everyone said the London Stadium was not the same. Everyone in football knows if you can get a team winning and trying every game you will get supporters backing you wherever. The supporters backed us today.”

Liverpool manager Jurgen Klopp: “The first goal is a foul on the goalkeeper. The arm goes against Alisson’s arm so how can he catch the ball when someone pulls his arm away? It makes no sense. It’s the typical excuse that VAR says it’s not clear and obvious but then what do you need?

“What can [Alisson] do? That’s why the goalie is protected in moments. If a player goes up with his arm for a goalie that’s an important position of the body and if that’s in the way how can he make a save?

“People will say I’m looking for excuses, I’m not. I accept we’re not too good to lose football games. Today we lost it, that’s not nice but I accept it. But when we speak about situations in a game you just need normal decisions from a referee. He didn’t do that.

“Cresswell? For me, it’s a reckless challenge. Even though he touches the ball, you can’t go in like that as anything can happen. You can say he touched the ball but you have to control your body.

“Those two situations were influential in the game but in the end, West Ham fought for the three points. They are not responsible for the decisions the VAR made.”

West Ham travels to Wolves after the international break at 3 pm on Saturday, November 20, while Liverpool host Arsenal the same Saturday in a mouth-watering clash at 6:30 pm.