One week after Will Smith resigned from the Academy following his altercation with Chris Rock at the 2022 Oscars, the organization has decided to bar the actor from future events for ten years. 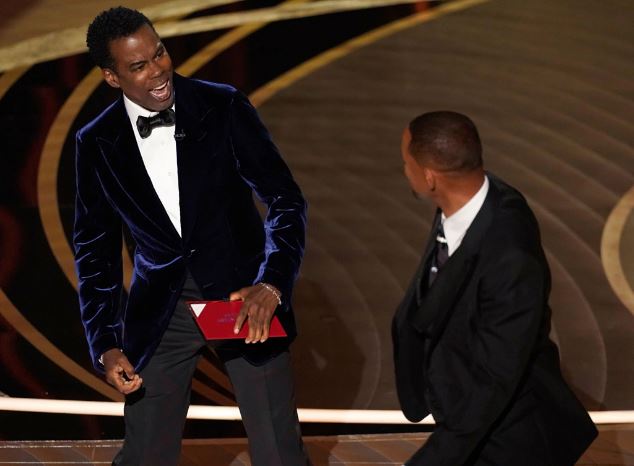 Will Smith and Chris Rock in an altercation at Oscars 2022

The Academy has banned Will Smith from “any events or programs, in person or virtually, including but not limited to the Academy Awards” for ten years, less than two weeks after he slapped Chris Rock onstage at the 2022 Oscars.

The move comes after the Academy’s board of directors meeting on April 8 to decide what disciplinary action would be taken against the actor in the aftermath of the March 27 show.

“During our telecast, we did not adequately address the situation in the room. For this, we are sorry. This was an opportunity for us to set an example for our guests, viewers and our Academy family around the world, and we fell short—unprepared for the unprecedented.”

“This action we are taking today in response to Will Smith’s behaviour is a step toward a larger goal of protecting the safety of our performers and guests, and restoring trust in the Academy,” the statement continued. “We also hope this can begin a time of healing and restoration for all involved and impacted.”

In response to the organization’s decision, Will Smith said in a statement that he “accepts and respects the Academy’s decision.”

The board’s most recent decision on the star’s actions comes exactly one week after the King Richard lead resigned from the Academy after his now-infamous Oscars debacle (which also means he can no longer vote in future Academy Awards).

Smith slapped Rock onstage during the awards ceremony after the comedian made a joke about Smith’s wife, Jada Pinkett-Smith. (Smith later won an Oscar for his role in King Richard later that evening and has publicly apologized for slapping Rock.) Smith will keep his current Oscar and will continue to be eligible for future awards.

“The list of those I have hurt is long and includes Chris, his family, many of my dear friends and loved ones, all those in attendance, and global audiences at home,” Smith said in an April 1 resignation statement obtained by enomaomoruyi.com/entertainment. “I betrayed the trust of the Academy. I deprived other nominees and winners of their opportunity to celebrate and be celebrated for their extraordinary work. I am heartbroken.”

Smith said he would accept “any and all” additional consequences for his actions, he continued, “I want to put the focus back on those who deserve attention for their achievements and allow the Academy to get back to the incredible work it does to support creativity and artistry in film.” At the time, in a separate statement, Academy president David Rubin confirmed he had received and accepted Smith’s resignation.