Will Smith gives credit to Venus and Serena Williams after 2022 SAG Awards Win.

Will Smith won the SAG Award for Male Actor in a Leading Role in a Motion Picture in 2022, and he described the accomplishment as “one of the greatest moments of my career.” 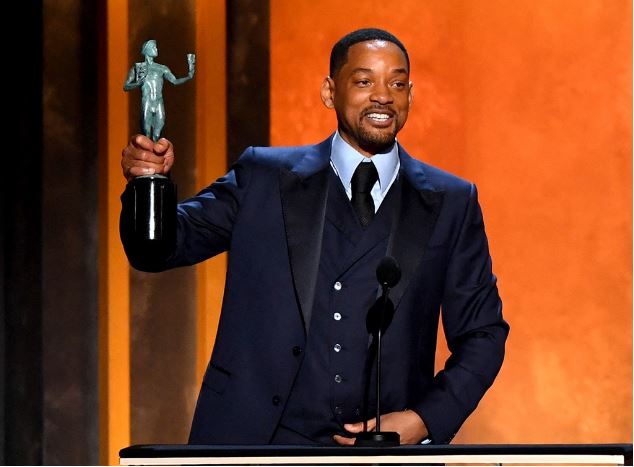 Will Smith with his SAG Award

On Sunday, Feb. 27, the 53-year-old actor received a SAG Award for Outstanding Performance by a Male Actor in a Leading Role in a Motion Picture at the 2022 ceremony. Will Smith, who portrayed Richard Williams in King Richard, the father and tennis coach of Venus and Serena Williams, beat out Benedict Cumberbatch, Javier Bardem, Andrew Garfield, and Denzel Washington for the award.

MUST READ:  "Your Ego and Pride stop you from Dating Me"-Busybody Uche Maduagwu tease DJ Cuppy after her sister got engaged

Will made a point of mentioning the Williams family during his acceptance speech because they were in attendance at the star-studded event. After taking the stage, the actor told the audience,

“That may have been one of the greatest moments of my career just now because my name was called for King Richard sitting next to Venus Williams and her sister.”

Will added calling Richard a “dreamer like no one you’ve ever known” before praising his co-stars Aunjanue Ellis, Saniyya Sidney, and Demi Singleton for their contributions to the film’s success.

“You guys are actors, so you know how sometimes your onscreen characters kind of bleed into real life,” he said. “To walk you around this room tonight, to parent you on this film, to deliver you into this business has been one of the greatest pleasures of my life. ”

Will Smith has won his first SAG Award. On Sunday, he was also nominated for Outstanding Performance by a Cast in a Motion Picture but lost to CODA’s stars. Will disclosed to the media! News when he first received the SAG Award nomination for his portrayal of the Williams father in the movie, “I am humbled and honoured that the Williams family trusted me with their story and that my fellow actors have given our film such a warm reception.”

“Getting to walk in Richard’s shoes and having the opportunity, not only to show the world how misunderstood he was but also to illuminate the true plight of this family as they paved their own road to becoming two of the most iconic names in sports history, “Will added.

“I’m beyond grateful for this experience, for this ensemble cast being recognized, and am most proud to play a small part in shining further light and love on the Williams family!”

Will’s win comes just weeks after he won a Golden Globe for his performance in the film. In addition, the actor is nominated for an Academy Award in the next Academy Awards ceremony in 2022.