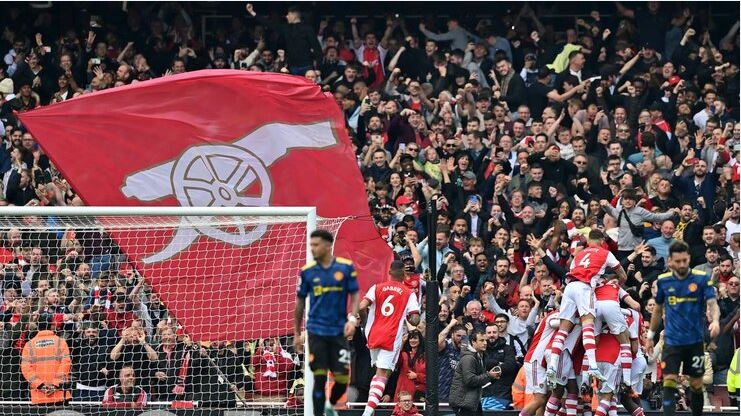 It took just two minutes and fourteen seconds for Arsenal to get their noses in front. Bukayo Saka made the most of a defensive mishap, forcing David de Gea into a wonderful save, only to then see Portuguese teenager Nuno Tavares pounce on the rebound to net his first goal for the ‘Gunners’.Man Utd agonisingly came close to an equaliser midway through the half when Diogo Dalot struck a thunderous long-range effort right into the woodwork before drama dawned upon the Emirates Stadium.

Teenage striker Eddie Nketiah thought he had doubled his side’s lead with a point-blank shot, only to be flagged offside by VAR. However, the review did point out an earlier foul on Saka in the box, who then stepped up to clinically slot home his penalty in the 32nd minute. Arsenal’s lead was cut short just two minutes later though, when  Portuguese international Cristiano Ronaldo came alive with a calm finish after Nemanja Matić’s terrific cross found him loitering in the box, marking his milestone 100th Premier League goal.

Man Utd wasted an amazing opportunity to level scores ten minutes after the restart, as Tavares gave away a penalty, reacting to which Bruno Fernandes struck the left post from 12-yards. Left standing as a spectator for the penalty, Aaron Ramsdale then pulled out a brace of superb saves – first from Anthony Elanga’s sublime strike directed towards the bottom left corner, before Dalot forced him to parry a shot onto the right post. Much to the dismay of chances missed earlier, Ralf Rangnick’s men were handed their third blow of the afternoon just before the final quarter-hour arrived, thanks to Granit Xhaka unleashing a ferocious strike from a distance that David De Gea could not stop, this left the visitors in disbelief.

Coming into this match on the back of contrasting midweek results at Chelsea and Liverpool respectively, both teams knew very well that only a victory here would hand either one of them a straightforward chance at qualifying for the Uefa Champions League spot. Mikel Arteta’s men are now in the driving seat for the race to grab the fourth spot.

What both managers said:

On the race to finish in the Champions League: “I said this is going to be a rollercoaster. The winning and losing in this league are small margins. Today things went our way and we are really happy.”

Man Utd interim manager Ralf Rangnick: “I think we showed an improved performance but in the end a disappointing result. I think we bounced back well from the early goal and had numerous chances in both halves to score more goals.

“I thought the weak part of our performance today as we didn’t defend well inside and around our box. I felt there were three very unlucky VAR decisions. For me, the Arsenal third was clearly offside. The second of Cristiano was not offside. We were not very happy with the VAR decisions today. An improved display but a disappointing result.”

On Fernandes’ missed penalty: “It would have helped us a lot if that had been the equaliser and probably would have changed the whole game. At the end, very unlucky for us.”

When asked if Man Utd’s top-four chances have gone, he added: “Pretty sure. For me, even before the game, it was not very likely but after today’s result it is gone yes.”

Arsenal travel to London rivals West Ham in the Premier League next Sunday, kick-off at 4.30 pm.