"You want war,I will give you war"-Halima Abubakar calls out Apostle Suleman and Shan George

“You want war, I will give you war”Halima Abubakar calls out Apostle Suleman and Shan George

The actress, who made headlines weeks ago after admitting to having an affair with clergyman Apostle Johnson Suleman, has reignited their feud.

Gist Lover, a controversial blogger, revealed that the actress was in a relationship with the man of God, who is allegedly fetish.

The anonymous blog revealed a slew of secrets and identities linked to Apostle Suleman.

Halima Abubakar, via her Instagram story, claimed that there would be a disaster if she opened her mouth to confirm the rumours.

“If I start to talk Nigeria will close. Hmmmmmm”, Halima wrote.

Still, on the subject, Halima Abubakar published screenshots of an alleged conversation between Shan George and the clergyman.

In the chat, Apostle Suleman asked if Halima had any evidence against her, to which Shan George replied that the actress isn’t smart enough to keep one.

MUST READ:  I Left The Relationship Because She Wears Same Pant For 3days-Nkechi Blessing Ex-Lover,Falegan Spill(video)

She was fuming at Shan George and wondered why the actress was after her.

Halima noted how Shan George spread false rumours that she had cancer four years ago. Shan George, on the other hand, apologized.

Halima Abubakar threatened to reveal more details about her relationship with the priest.

“God bless you all till infinity your care and love is overwhelming.. I will see you soon. God is Good. Pls be careful with friend & co workers, they love no one I use to call her mami. Why you still ffing me? Thank God I never took any thing from you. Shan you said I had cancer 4 years ago, of which you denied and apologize. Did I tell you, I don’t know where my problem is from? You calling me names again. Imagine both of you. Johnson you want war? I will give you war. Try and bring my page down. E go shock you”. 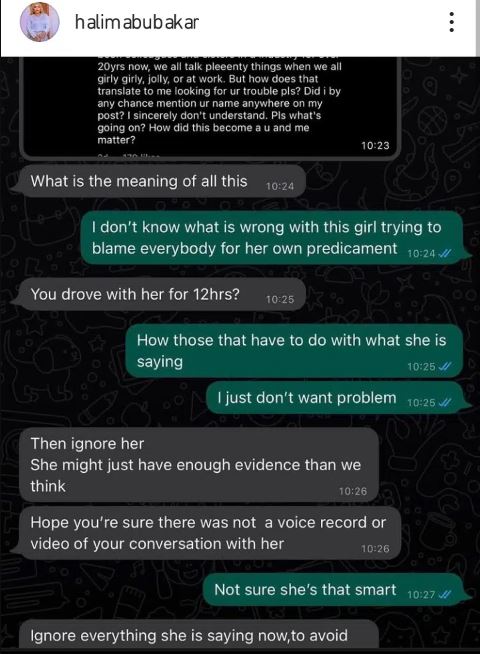 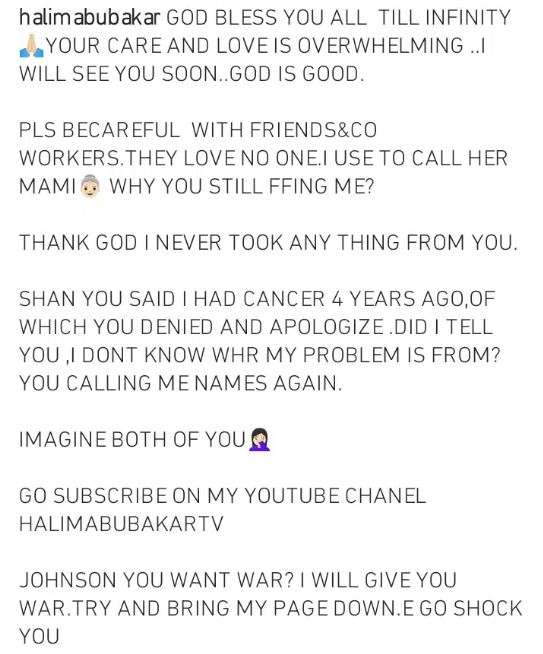 BBNaijaS7:Allyson evicted from Level Up House