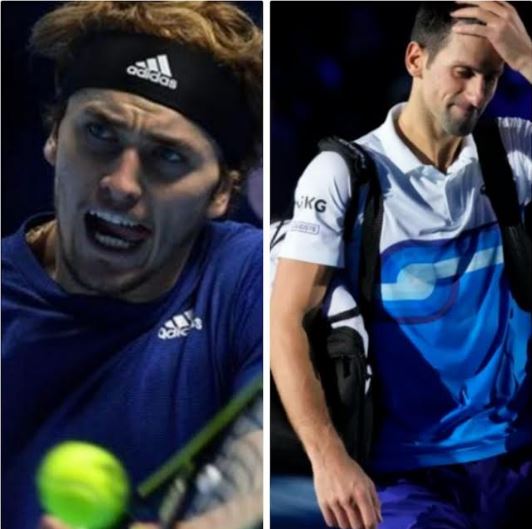 In a high-quality semi-final, German third seed Alexander Zverev stopped Novak Djokovic’s bid for a record-equaling sixth ATP Finals victory, this is the second time this year the German has halted Djokovic from competing in a major trophy.

World number one Djokovic was defeated 7-6 (7-4) 4-6 6-3 by Zverev, who will face Russia’s Daniil Medvedev in the final on Sunday.

Zverev was outstanding throughout the match, serving consistently and carefully trading points from the baseline to wear Djokovic down.

During a tense first set, both players appeared to be at ease on serve until Djokovic gained a set chance at 5-4 by clinching a 34-shot rally with a superb backhand.

As the opener progressed into a tie-break, Zverev saved that breakpoint and was unable to take two break points himself in the next game.

The 2018 winner continued to play with patience, power, and precision, winning the tie-break and becoming the first opponent this week to take a set off Djokovic, who is 34 years old.

Early in the second set, there were concerns that Djokovic was losing concentration, only for the 20-time Grand Slam champion to rally and break for 5-4 before serving out to force a decider.

After Djokovic lost patience in the rallies and produced four unforced errors in the game, Zverev broke for a 3-1 lead in the third set.

After holding for a 5-2 lead after surviving a breakpoint, the German served out to love to become the only player to defeat Djokovic twice in another incredibly successful season for the Australian, French, and Wimbledon champion.

ZVEREV SPEAKS AFTER THE MATCH…

Zverev said “It took a lot of physical strength to beat Novak Djokovic, every time we play it takes hours,” who also beat Serb Djokovic in the Olympic semi-finals but lost to him at the Australian Open and US Open.

“I’ve not spent more time with anybody on the court than him this year. I’m happy to win, happy to be in the final and give myself the best chance there.”